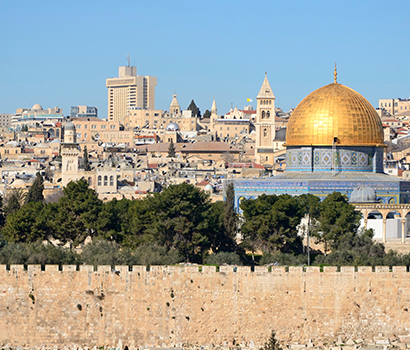 For over 60 years, the Joseph and Harvey Meyerhoff Family Charitable Funds (“the Funds”) have been making grants in Baltimore, in the Jewish community locally, nationally, the former Soviet Union, and in Israel. Today, members of our professional team continue the enduring legacy of those who preceded them.

Elizabeth R. Minkin, Bud and Lyn’s granddaughter, is the President of the Funds. She is responsible for the day-to-day operations of the Funds in concert with the grants committee. She provides oversite of all initiatives locally and nationally, along with an extensive portfolio of programs and capital projects in Israel. Prior to her work at the Funds, Buffy spent more than 12 years in the real estate industry, both in residential construction and development and in commercial brokerage services. She is an active leader in both the Jewish and secular Baltimore communities, receiving several awards for her leadership in the Baltimore Jewish community. In addition to her board service, she is active in both of her children’s schools. Buffy is a 1996 graduate of Union College in Schenectady, NY, with a B.A. in Economics and a minor in French. Buffy and her husband, Will Minkin, an attorney and active community leader, live in Baltimore County with their two children.

Misty Gibson, Esq. is the Director of Grants and Programs. She manages our Baltimore Target Neighborhood grantmaking and roundtables, oversees our grants process and capital projects, engages our next generation, and a variety of other projects.  She has been with the Funds since 2007 and has over fifteen years’ experience working in government, political campaigns, and non-profit organizations. Misty is a graduate of Otterbein University in Westerville, Ohio, and obtained her J.D. from the University of Baltimore School of Law in 2011. She lives in Baltimore County with her husband and their two children.

Brooke Brodsky is the Funds' Program Assistant. She assists with all aspects of our grantmaking and handles scheduling and other administrative and support activities. Brooke is originally from Chicago. She lives in Baltimore with her husband and children.

Liz Trakeniski Bennett is the Funds’ Representative in Israel. She is originally from London, and she has lived in Israel since 1981. Her professional background as a community worker includes directing Project Renewal Social Rehabilitation programs, being the CEO of an NGO, representing overseas foundations, and mentoring new and young community organizations. Liz has been with the Funds since 2008 and currently works closely with the Baltimore office staff and grants committee. In addition to her work, Liz is a mother to two adult children and an ardent fan of tennis and cinema.

Terry M. Rubenstein, Bud and Lyn’s eldest daughter, served as Executive Vice President of the Joseph and Harvey Meyerhoff Family Charitable Funds for 14 years, beginning in 1998 and ending with her retirement in 2011. Prior to joining the Funds, she built and developed homes and was a newspaper reporter and radio reporter. In addition to overseeing our philanthropic efforts, she also managed the family office. During her tenure, she streamlined our operations, expanded our grantmaking capacity, directed our middle neighborhood work, evolved the Funds into an umbrella organization of family funds, promoted initiatives to involve the next generation of family members, and oversaw the inclusion of her siblings as grants committee members. She also moved our office to its current location.

George Hess, the former CEO of Hess shoes, directed the Family’s philanthropic activities from the mid-1980s to late-1990s. Along with Lyn, Bud, and Ellie, George worked to develop additional philanthropic opportunities for the family’s young adult children.

Dr. Louis L. Kaplan, considered the grandfather of modern Jewish education in Baltimore, was Joe’s close friend and teacher. As the first Executive Vice President of the Joseph Meyerhoff Fund, he worked alongside Joe for 15 years. Along with Lyn and Bud, Dr. Kaplan helped to create the infrastructure to formalize the family’s philanthropic giving.