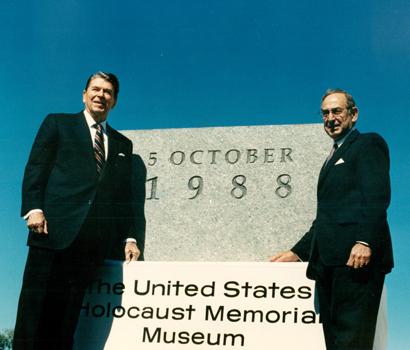 We have deep roots in Baltimore and the Jewish communities.  Joseph “Joe” Meyerhoff immigrated to Baltimore from Russia in 1906 as a young boy. He married Rebecca Witten in 1921 and they had three children: Peggy Meyerhoff Pearlstone, Harvey “Bud” Meyerhoff, and Eleanor “Ellie” Meyerhoff Katz.

Over the years, Joe built a successful real estate business with his son Bud, son-in-law Jack Pearlstone, and others. As the real estate business grew, Joe developed into a prominent philanthropist and leader in Baltimore and in the national real estate industry. He and Rebecca are best known for their commitment to and leadership of the Baltimore Symphony Orchestra, whose hall bears his name. Yet their contributions to other Baltimore and Jewish institutions are widespread including the auditorium at the Baltimore Museum of Art, libraries throughout Israel, and university scholarships. Throughout his life and career, Joe applied his no-nonsense, self-effacing leadership style to chair numerous national and international organizations. He was part of the diaspora leadership that established the state of Israel and was one of the founders of Israel Bonds.

Their eldest child, Peggy established herself as a Baltimore leader in her own right. She was known for her commitment to The Associated: Jewish Community Federation of Baltimore, Jewish Family and Children’s Services, the Girl Scouts, Center Stage, and Goucher College, until her untimely death in 1974.

Joe and Rebecca’s second daughter, Ellie, served as vice president of the Joseph Meyerhoff Fund and established her own foundation with her husband Herb Katz. She became well known nationally for her leadership in Hillel International and support of Jewish educational initiatives. She also provided significant leadership in the community of Broward County, Florida until her death at the age of 80 in 2014.

Bud, Joe and Rebecca’s only son, married Lyn Pancoe in 1948, and their partnership endured until her death in 1988. Lyn, who said she “never worked a day in her life,” was a boundless dreamer and activist who helped found the National Aquarium in Baltimore, created the Harvey M. and Lyn P. Meyerhoff Inflammatory Bowel Disease Center at Johns Hopkins Hospital, arranged for the Baltimore Symphony Orchestra tour to Russia in 1987 during a very precarious time in international relations, and served as an at-large-delegate to the United Nations. Prior to her death in 1988, Lyn worked with President Ronald Reagan to obtain the land for the U.S. Holocaust Memorial Museum on the National Mall and, even while gravely ill, asked Bud to chair the effort to see the Museum built. He agreed and was appointed by President Reagan to succeed Elie Wiesel as president of the United States Holocaust Memorial Council. Under Bud’s leadership, the Museum opened on April 23, 1993.

In addition to directing the Joseph and Harvey Meyerhoff Family Charitable Funds’ grantmaking until early 2000, Bud’s life has embodied his family’s legacy of philanthropy and leadership. He chaired the Johns Hopkins Health System, League for the Handicapped, and the United Way of Central Maryland. He was also prominent in a number of national real estate industry groups during his career which spanned more than 30 years.